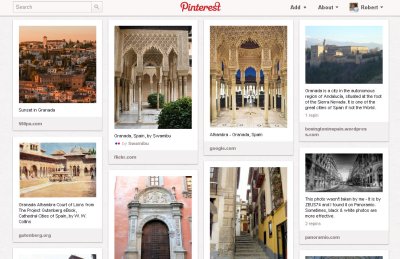 Granada is a city in the autonomous region of Andalucía, situated at the foot of the Sierra Nevada. It is one of the great cities of Spain if not the World.

When visiting Granada it is tempting to spend all one’s time admiring the Alhambra. From afar one can admire the beauty of its red walled parapets contrasting with the snow capped Sierra Nevada whilst once inside one can absorb oneself in the sheer splendour of its fantastic palaces and its tranquil gardens. However, Granada has much more to offer the visitor.

It is a city where both Moorish and Christian history is visible in art and architecture.

Moorish Granada is exemplified by the UNESCO World Heritage Sites of the Alhambra, the Generalife and the Albaicín district whilst the Capilla Real and the Cathedral represent Christian Granada.

for more photographs of Granada click on the following link….

If there is one place you should visit in Spain, it is the Alhambra Palace in Granada.

The Alhambra reigns supreme in the city of Granada and rightly so. If it stood on a flat plain, it would still be one of the most spectacular fortresses ever built. However, it sits at the top of the highest wooded hill in the city. Not only that – this red-walled palace has the fairytale backdrop of the snow-capped peaks of the Sierra Nevada. Well, for most of the year the mountains are snow-capped – in August, they are somewhat er… rock-capped!

If the view from afar is spectacular, the interior of the Alhambra is simply stupendous! There is so much of artistic merit to see. However, there are four main areas to explore: the Alcazaba, the Palace of Charles V, the Casa Real or Royal Palace and the Generalife Gardens.

More photographs of the Alhambra can be found on my Panoramio site:-