The province of Almería is the sunniest driest place in Spain. It also has the cleanest atmosphere in Europe and hardly any cloud making it an ideal location for installing an observatory.

Calar Alto, at an altitude of 2,168 metres (7,113 feet), is the highest mountain in Almería and was, therefore chosen as the location for an astronomical observatory. Called, appropriately enough, the Calar Alto Observatory, it is owned and operated jointly by Max-Planck institute for astronomy and the Institute of Astrophysics of Andalucía.

It was officially opened in July 1975 with the commissioning of its 1.2 metre telescope. The site has developed due to the strong ties between the German and Spanish owners and 4 more telescopes have been installed – the largest being 3.5 metres.

The Calar Alto mountaintop is situated in the Sierra de los Filabres, north of the town of Gérgal. It is a pleasant place to walk on a summer’s day, as the temperature is several degrees cooler than down on the coast. 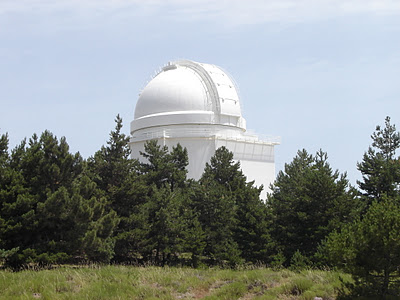 This entry was posted on July 1, 2013 by Robert Bovington. It was filed under Photographs, Spain and was tagged with Almería province, Andalucía, Andalusia, Max-Planck, observatory, Sierra de los Filabres, Spain.